Created relatively recently, the Heians were originally called Pinan from the Okinawan pronunciation of the Chinese word for safety. When introduced to Japan, Master Funakoshi opted to use the Japanese pronunciation Heian. Considered basic kata for beginning students.

Originally known in Okinawa as Naihanchi, the katas were renamed by Master Funakoshi upon its introduction to Japan to reflect the strength exhibited with kiba-dachi. Rich in fighting techniques, the Tekki family offers a plethora of close combat techniques. ISKA founder, Hanshi Vincent Cruz created a whole series of different kata. One of his favorites was a kata called, “Shimei,” meaning “life” or “death,” implying one’s ultimate fate or destiny. We have selected the kanji 「死命」but it is not certain that this is the kanji and intended meaning that Hanshi Cruz had, or if he even used kanji for it at all.
It is a very short, compact kata, with a linear embusen pattern, so it is easy to learn, yet difficult to master.

The strong techniques of this kata emphasize hip movement. Some resemble a battering ram being used against fortress walls.

This kata was derived from Bassai-Dai. It has a similar performance line.

Most of the elements of the Heian Kata were derived from this kata. The first movement in this kata views the sky, which symbolizes the universe and shows your opponent that you are unarmed. It was Master Funakoshi’s preferred kata.

Kanku Sho was created from Kanku Dai. The movements and performance line are similar.

This kata received its name from its principal stance, hangetsu dachi (half moon stance).

This kata is one of the most advance kata of Shotokan. Master Funakoshi called it hotaku (knocking of a woodpecker) because some of the techniques resemble a woodpecker tapping its beak against a tree.

This is a smaller version of Goju Shi Ho Dai. It is also one of the most advanced kata of Shotokan.

The quick up and down movements of this kata are reminiscent of a fling swallow. Enpi is one of the oldest kata in Shotokan. Its former name was Wanshu.

Jion is a term in Buddhism. It is also the name of a temple in China. It uses basic stances and techniques. It is one of the most traditional kata in Shotokan.

Jiin is another term in Buddhism. It has similar techniques and performance line as Jion.

The goal of this kata is to teach a student to fight against ten opponents. This is a strong kata, similar to jion and Jiin.

The first movements of this kata suggest the smoothing of water to make it as calm and even as a mirror. The triangle jump at the end of this kata is said to have a secret meaning portending to a miracle.

The movements in this kata resemble waves breaking on a cliff. The former name of this kata was ni sei shi.

Wankan is the shortest kata in Shotokan.

The main stance in this kata (tsuruashi dachi) resembles a crane ready to strike at its prey. The movements are supposed to simulate a fight in the narrow alleyways of Okinawa. The former name of this kata was Chinto.

The name of this kata comes from its stance (sochin dachi), a strong, rooted stance. The purpose of this kata is to teach defense against a stick. Its former name was Hakko.

Chinte has a lot of circular and roundhouse techniques. These are rare and are not typical of the shortest distance between two points concept of Shotokan.

Unsu has several techniques that symbolize parting the clouds with open hands. It is also one of the most advanced kata of Shotokan. 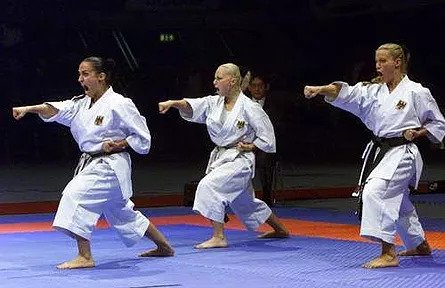